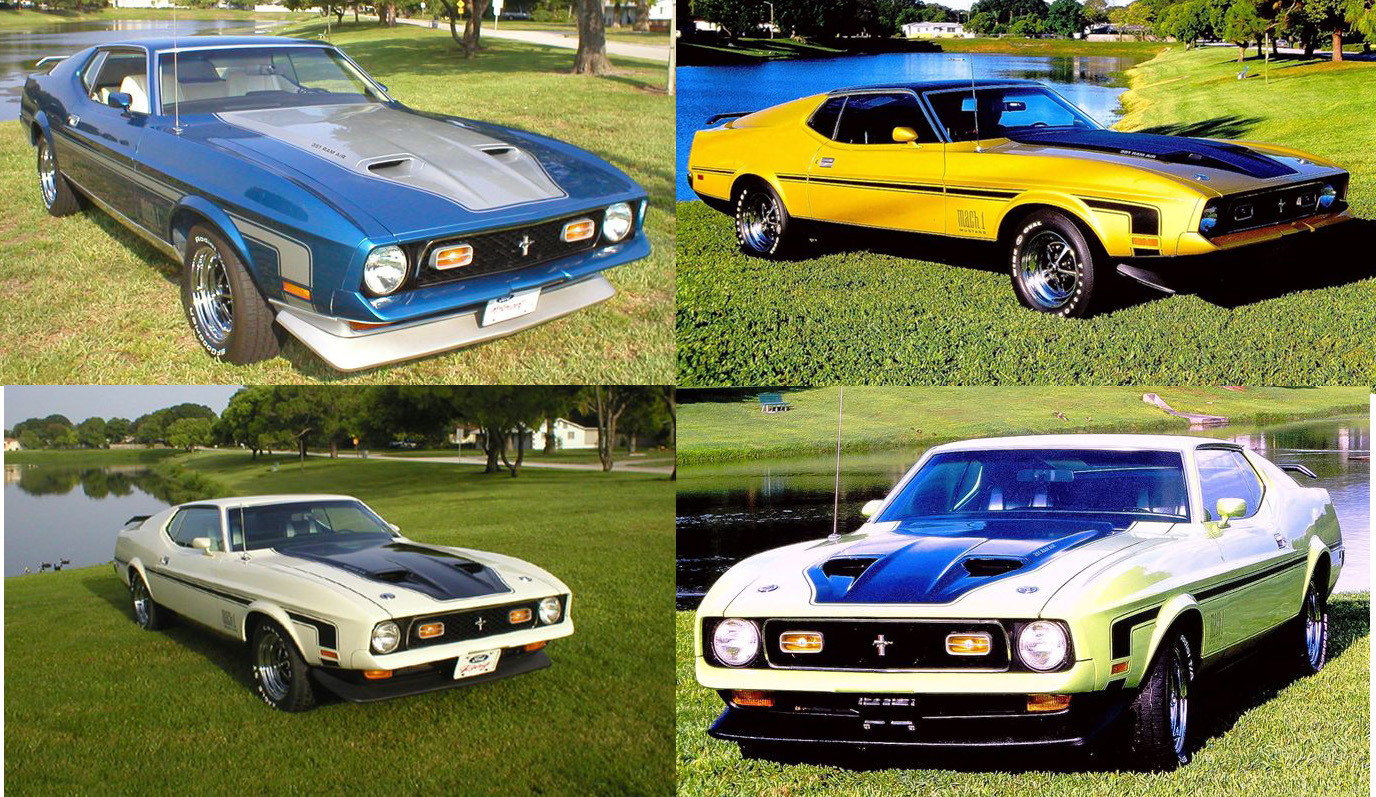 We asked Tim what’s been going on? and as you can see he’s been a bit busy

I restored my first car as a 16-year old. Using the term “restored” is quite a stretch when one considers the crude nature of my work. But it was a rewarding and fun experience for me. Since then, I’ve enjoyed working on both the mechanical and the body portion of cars. But it wasn’t 2000 that I was given the opportunity to purchase and restore my first Mustang, Mach 1, a 1972 Mach 1 in Grabber Green. This was “Kermit.”

I was hooked by the experience. So, for the next ten plus years I searched for affordable projects, made the purchase, completed the restoration, and put tired Mach 1’s back on the street where they belonged. Here are a few examples.

This 1971 Ford Mustang Mach 1 was sold new to a member of a local family at the Boyce Ransom Ford Dealership in Conover, North Carolina on May 14, 1971. The teenage son who drove the car was tragically killed within a year or two of its purchase. After his death, the family kept the car for an undisclosed period of time. There are no North Carolina DMV records for the vehicle after 1975. So, the details are sketchy for this period of time as members of the family, including the father, all passed away. The car and the family estate eventually came up for auction in the late 1980’s.

A resident (friend of mine) of nearby Lenoire, North Carolina, who understood the value of a 1971 Mach 1 powered by a J Code, 429 Super Cobra Jet, purchased the Mustang at auction, intending on completing a frame-off restoration (no title for the car was found). But he also had three other 1971 Mach 1’s which needed his attention. So, the vehicle remained idle in storage for a period of years (1990-1998).

In 1999, my friend starting the frame off restoration process by taking the vehicle down to its mere shell. All the surviving original parts were stored in his basement (I was there and actually saw all the parts, motor, tranny, interior, doors, glass, doors, etc.). He rebuilt the 429 SCJ engine, had the C-6 transmission rebuilt by professionals, and redid the N Case, rear end assembly himself. A body guy took the frame and shell down to bare metal, completing the job with media blasting and then covering it with POR-15, an anti-rust primer, followed by a coat of black paint.

The C-6 transmission rebuild included an upgrade to roller bearings, a shift kit to improve shifting, and a new stall torque converter.

While the motor, tranny, and rear end were rebuilt, the frame still sat empty and all the surviving parts remained in his basement.

It had suffered significant damage to the roof in a hurricane that passed through his area. So, I agreed to purchase it. So, then, based upon that past connection and successful transaction history, he asked me in 2010 if I was interested in the now completely disassembled 1971 Mach 1.

I had seen the bare shell and various parts in his basement over the years, but had no intentions of tackling such a long-term task. It would boil down to a “every nut and bolt” type of restoration. He felt physically unable to perform the labor required to reassemble the entire vehicle, a substantial undertaking. And, what is more, he had recently married (late bloomer he was) a lady who (understandably) wanted to use their basement for other than a parts storage area. So, after a year or two of clearing away my other car projects (I also restore 1977-1979 Ford Thunderbirds), I agreed to purchase the Mach 1 as is–if he could obtain a North Carolina title for the car. This was no simple task. I agreed in principle to purchase the vehicle if he could obtain the necessary title.

He encountered many roadblocks on this journey. But by 2015, he finally was able to secure a NC title. I then made the transaction, and the disassembled 1971 Mach 1 became mine officially.  I had little idea what was in store for me.

Missing from the original pile of parts were the rear bumper, rear spoiler, fuel tank, set of deluxe door panels, carpet, headliner, smog system, front honey comb grille, space saver spare and bottle, 15” Magnum 500 wheels and center caps, Holley 780 carburetor,  starter, radio antenna, shocks, power steering pump, and various other odds and ends. This was perfectly reasonable when considering the lengthy time-period the car sat disassembled. Parts just seemed to disappear. But one important original item remained with the car that was striking: the speedo-tach gauge cluster,  reading at 79,000 miles. The seller confirmed that particular number as authentic mileage for the vehicle when he purchased it. So, we have a 79,000-mile 1971 Mach 1.

The first step involved was getting the Mach 1 painted in its original Grabber Blue color (base coat, clear coat). After that was completed, I had all the parts and components shipped to a friend of mine in Georgia to begin the process and then, on to my home in Florida for the long-term assembly process.

The reassembly process in my case was unique. Rather than sending out all the parts to be restored or refurbished by professionals, I pretty much did the work myself. Quite amateurish. The results are fairly predictable. Many parts show their age. For example, the steering wheel is original and remains in the same condition the day it was removed. The original driver side window has its share of scratches. The set of four 14-inch Magnum 500’s on the car are pre-owned and show aging. (The Mach 1 originally came with 15-inch Magnums and would show better with such; but at the time, the price for a set of pre-owned Magnums seemed right). The paint on the center console lid is faded. The battery, belts, and hoses are standard auto parts store fare.  But what is important is that vehicle was taken down to bare metal and so is rust free.

By January 2020, the Mach 1 was completely reassembled, titled, tagged, insured, running, and finally, back on the road again. And credit must be given to Don at OMS for helping me locate needed parts and also for providing timely, friendly advice on how to proceed forward. Three-cheers for Don. And Randy Jacobsen of Midlife Harness restorations has helped me sort out some wiring issues. Thanks to Randy.

The original specs touted by Ford for the 1971 429 Super Cobra Jet motor indicate a rating of 375 horsepower. I cannot say for sure, of course, but when I feed that big-block motor lots of juice, it feels like I’m in a 10 second car. The rear tires chirp even when shifting into reverse.

Though the precise details about the use of the car for the years 1975 to the late 80’s remain somewhat shrouded, we are quite certain that this is the first time since 1975 (maybe earlier) that this Grabber Blue, 1971 Mustang Mach 1, J Code, 429 Super Cobra Jet, is back on the road. I drive it daily here in west central Florida, running errands, and enjoying the brute strength and exotic sound of a big-block Ford under the hood.