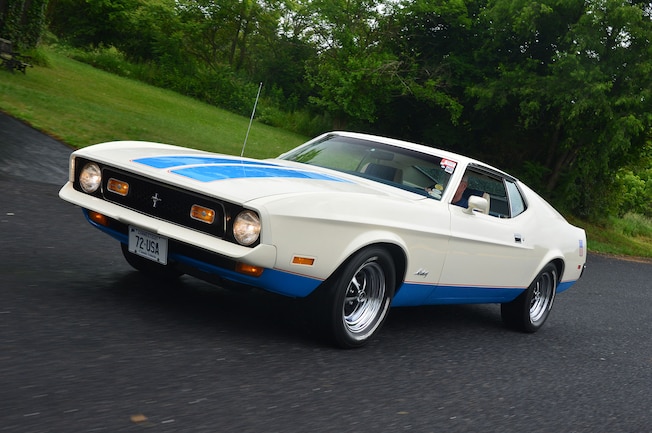 I remember the 1972 Summer Olympics for the exploits of legendary swimmer Mark Spitz. Competing in the Games of the XX Olympiad hosted by Munich, Germany, Spitz set a world record for each of his gold medals, adding up to a whopping total of nine during his lifetime. His swimming record held ground for 36 years, until Michael Phelps exceeded it in 2008 with a stunning eight gold medals. And during Men’s Basketball, the United States lost to the Soviet Union (Russia) by one point in what is easily the most controversial basketball game in Olympic history.

An all-American Olympic red-white-and-blue Sprint package was perfectly timed for release between March and June of 1972 right before the Summer Olympics and all its excitement. Edsel B. Ford II, Merchandising Marketing Manager at Ford at the time, can be credited for the Olympic Sprint campaign. He saw sales gold in the package, which was available on select Ford Division Mustang, Maverick, and Pinto vehicles. 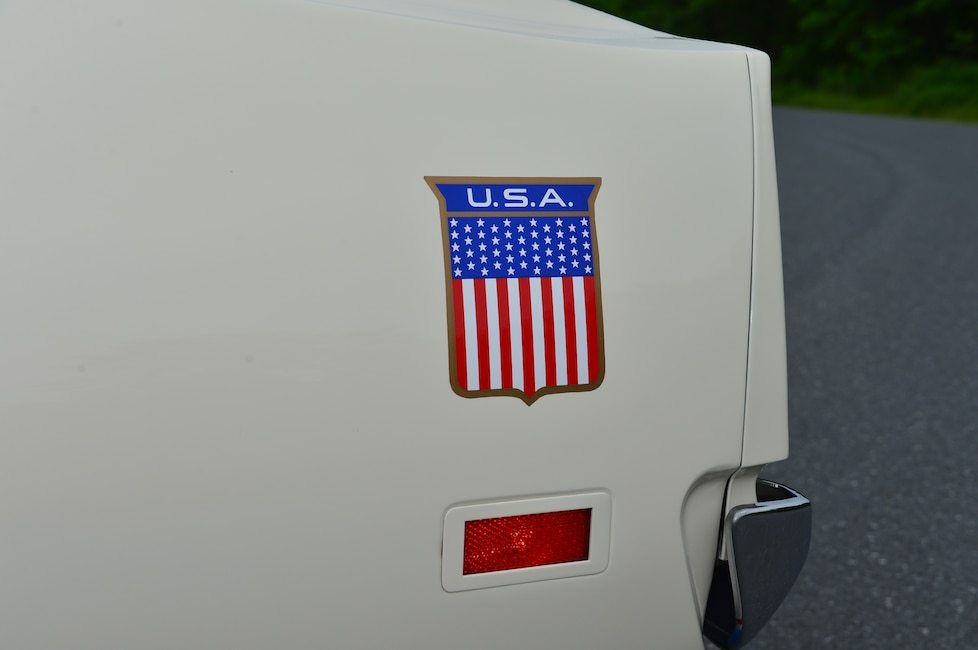 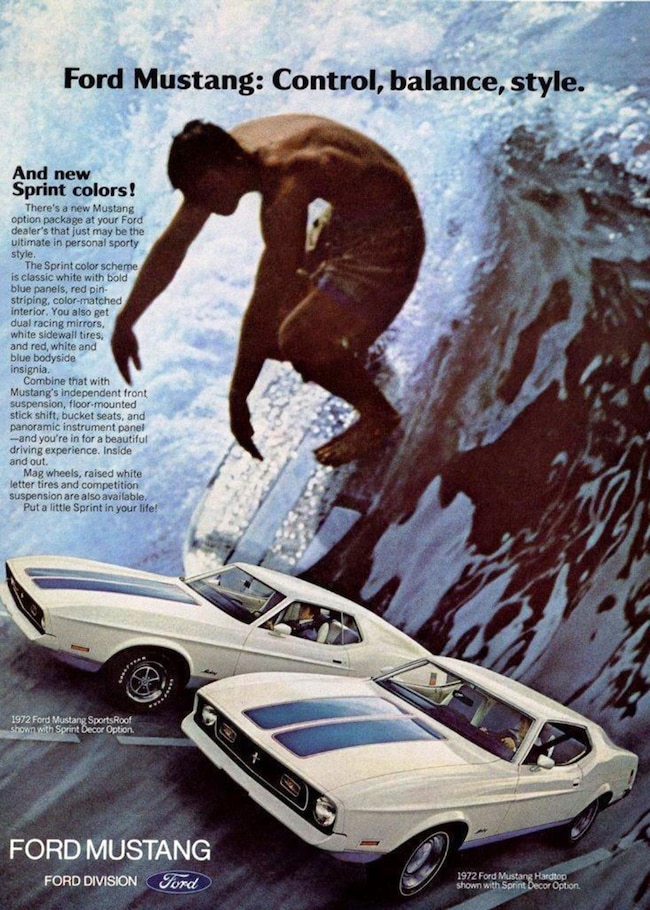 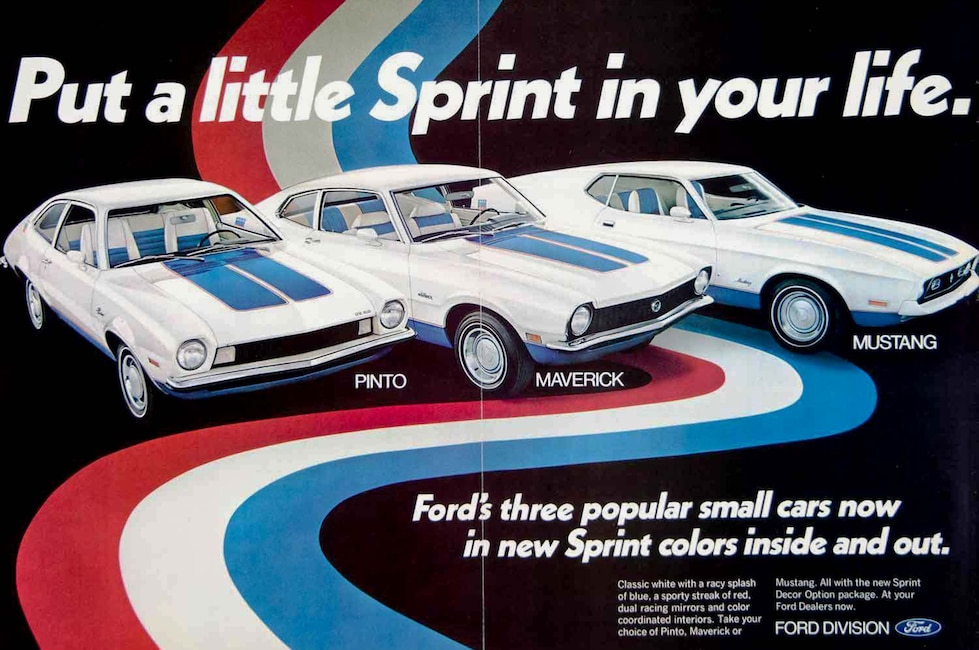 The Sprint Décor Group option was conceived to jumpstart sagging sales during one of the Mustang’s worst sales years. The package was one of the most striking in the marque’s history, which made it a popular seller. By the end of the model year, 9,383 units were sold in all three Mustang body styles. That accounts for 7.5 percent of Mustang sales, according to the 1972 Mustang Sprint Registry.

All 1972 Sprint Mustangs, including the United States and Canada, were produced at the Dearborn, Michigan, assembly plant and shipped to virtually every North American Ford sales district. The plant ever produced a Canadian Mustang Sprint bearing a maple-leaf insignia, though very few. One of them, owned by Eric Shink of Quebec, was featured here in Mustang Monthly in April 2009, making it one of the most unusual Mustangs ever bucked at Dearborn. Ford insiders were stunned by the announcement from Henry Ford II (far left) that GM’s Semon E. “Bunkie” Knudsen (center) was named Ford President in early 1968. Knudsen would be at Ford long enough to change Mustang’s direction for the early ’70s. Despite all the hype about larger V-8s coming for the redesigned 1971 Mustang, the cubes never came and Bunkie was out little more than a year later. On the lighter side, he and stylist Larry Shinoda birthed the 1969-1971 Boss Mustangs.

—All of the above from Sprint Package A, plus:
—Competition suspension
—F60x15 wide oval raised white letter tires
—Magnum 500 wheels 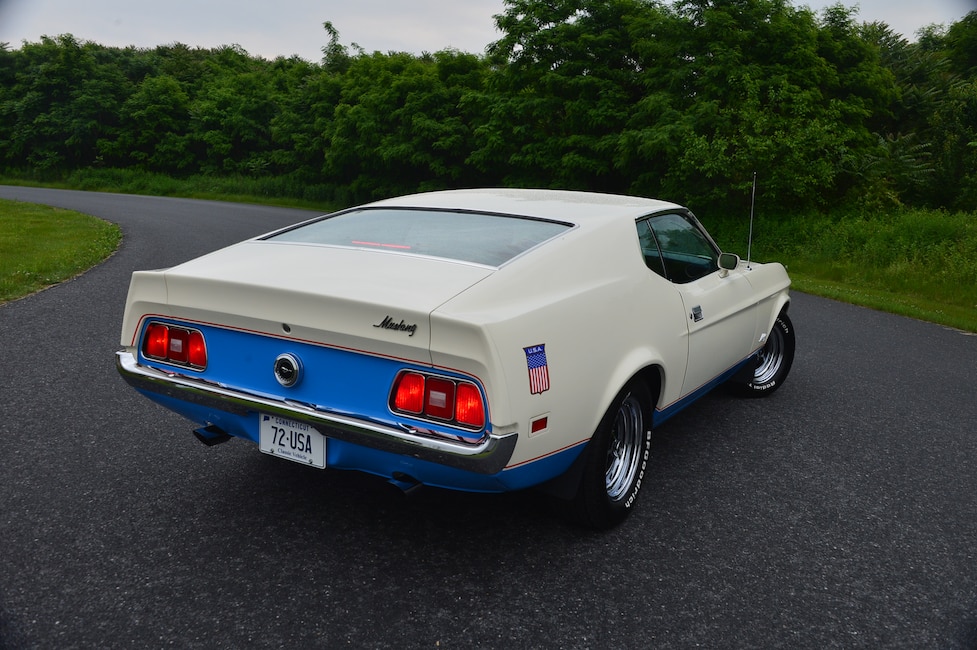 Connecticut’s own Bob Hand understands the passion 1971-1973 Mustang owners feel for their road-going Pony rides. “Around 1995, I decided I wanted a project car, and being a long-time Ford enthusiast, it just had to be a Mustang. I started looking for a 1965 or 1966 Mustang fastback,” Hand tells Mustang Monthly. “Before I could find an early Mustang, an ad for a 1972 Sprint SportsRoof caught my attention. I had worked for a Ford dealer at one time and understood the Sprint was a rare find.”

“I bought my Sprint from a young man on Long Island, New York, who had purchased it from a dealer in Birmingham, Alabama,” Hand says. He began this restoration with a complete car with just 97,000 miles showing. Everything important to a complete concours restoration was there. “I decided to perform a complete restoration and wound up addressing every single part, including the factory inspection marks, decals, and more,” Hand says. “Fourteen years later in July 2010, I completed my extensive restoration. Today, I drive and enjoy the car every chance I get, going to cruise nights and shows nearly every week during the summertime. I’ve logged about 4,000 miles a year.”

Looking at the stunning condition of this car, which sees thousands of miles of driving pleasure each year, it is remarkable to know this is Hand’s first restoration. “I’ve been a car nut and have been wrenching on cars since high school. One of my high school jobs was prepping cars for paint at a local body shop. In the late ’60s, while working for an aircraft engine manufacturer, I picked up a part-time job at a local Ford dealer,” Hand says. “I specialized in electrical system repairs. I found myself taking all the training available to me and became a certified Ford tech. I left the Ford dealer in the mid-’70s. Little did I realize I would be using that experience nearly a half century later.”

Hand retired in 2008 after a 42-year career in aircraft engine manufacturing, where he honed his skills and put them to work restoring his Sprint. “Now, I am enjoying this great hobby full time,” he says. “When I look back I realize how fortunate I was to have driven and worked on these cars when they were new.”

Hand stresses that he addressed every painstaking detail to get the Sprint as original as he could. He did opt for elements that made the car better, including BFGoodrich Radial T/A tires, Pertronix ignition, LED lamps in the instrument cluster, a third brake light, and dual exhausts to give the 351C-2V engine its throat. Every hard line in the car is stainless steel. Although the factory air-conditioning looks original, it is an R-134a conversion for convenience. The original Philco AM radio works, as does the factory clock. Hand just picked up a tilt steering column for the Sprint, which is being restored and detailed as we speak.

“When I started this restoration in 1996, there were not a lot of reproduction parts available for the 1971-1973 Mustang. I had to find new old stock parts, which I found mostly at the Carlisle All-Ford Nationals. Floors, quarter panels, tail panel, and radiator support improved my welding skills,” Hand says. “My local automotive paint store encouraged me to paint the car, offering excellent advice along the way.” 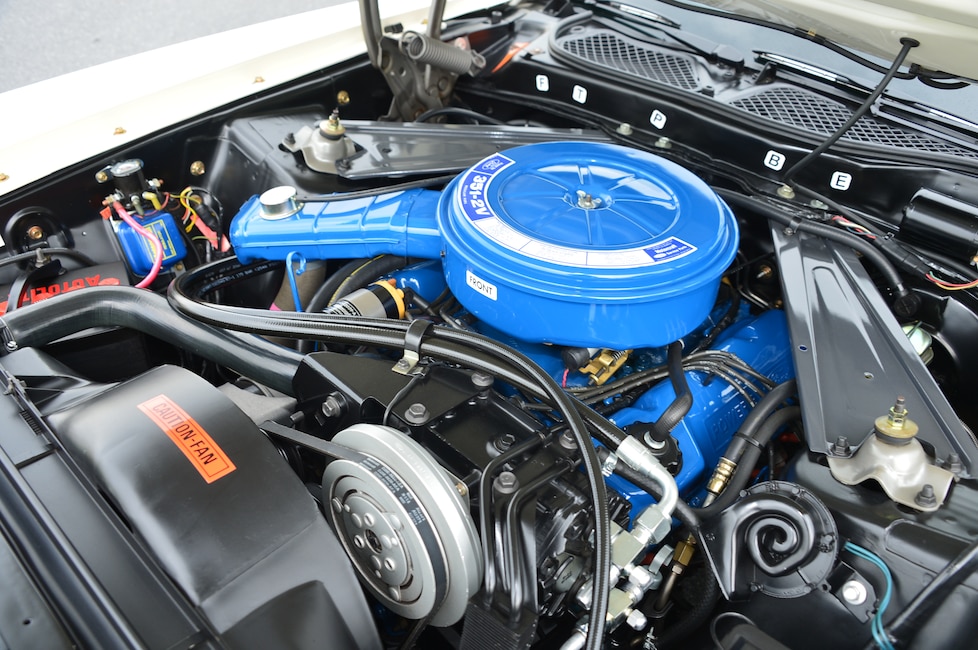 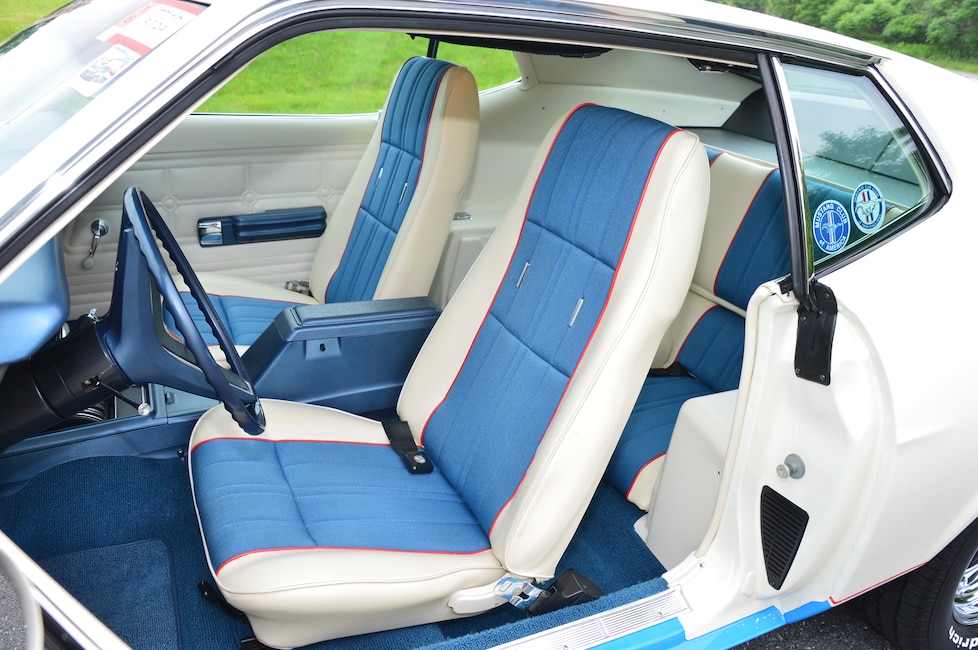 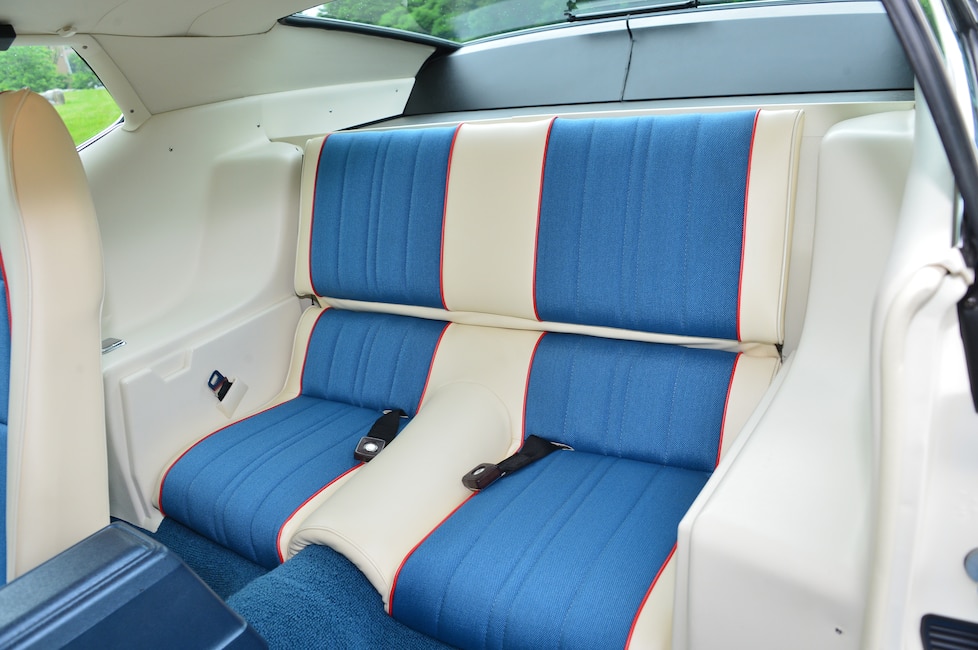 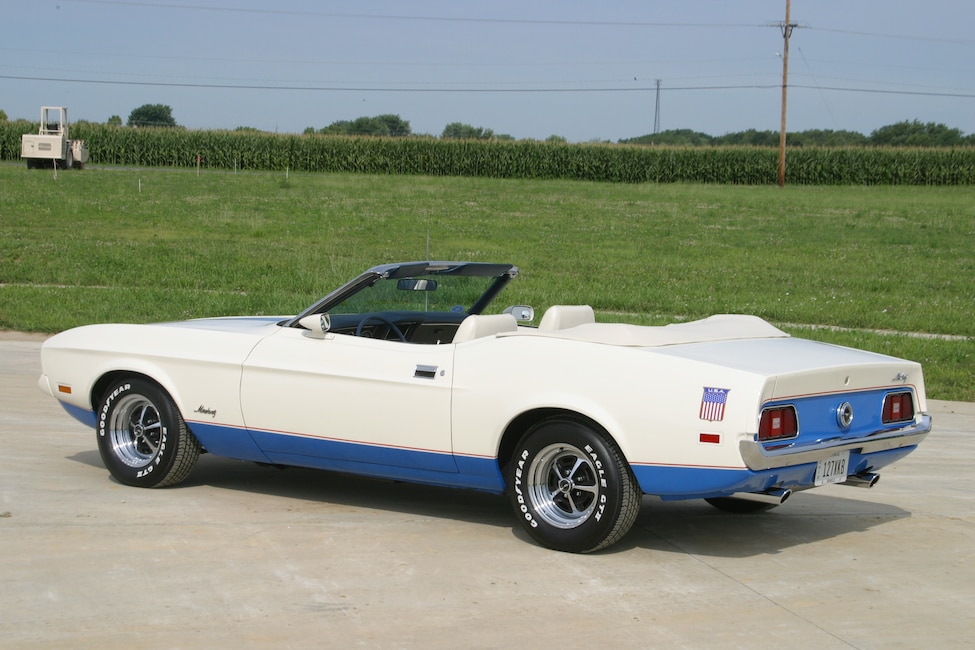 One of 50 Mustang Sprint convertibles produced for the Cherry Blossom Parade in Washington, D.C., in 1972. Owner Howard Ducharme allowed us to photograph this convertible at the MCA National Show in Springfield, Illinois in 2007.

Hand didn’t stop at the body. The 351C-2V engine was completely rebuilt by Accurate Machine in Middleton, Connecticut. The Cleveland is long on torque, offering snappy acceleration like we remember from an era long gone. Behind the 351C is Ford’s timeless classic cast iron FMX transmission, splined into a 9-inch Ford axle with 2.75:1 cogs.

Where this restoration became dicey was the interior. “Hardtop and SportsRoof Sprints employed Blue Lambeth cloth for the seat inserts, which hasn’t been available for years,” Hand says. “After researching and searching for 10 years without success, I contacted SMS Auto Fabrics in Oregon. I sent them an email on a Saturday night. By Sunday morning, I their reply stated they had exactly what I needed and would send me a sample.” TMI Products made a complete set of upholstery for him that matched the original exactly.

Close examination of Hand’s certification sticker reveals a DSO code of 21, indicating an original sale in the Atlanta, Georgia, district where this car spent most of its life. Dearborn assembly bucked the body and began assembly on April 7, 1972, before shipping it off to Carey Paul Ford in Decatur, Georgia, a short time later. The vehicle sat on the lot for months before finally being sold on August 18.

Hand has a couple of other Mustangs in his stable, including a 1999 GT with 18,000 miles and one of the 1990 7-Up convertibles with 158,000 miles on the dial. His remarkable past has led him to a magnificent retirement in the company of three fun-to-drive Mustang automobiles. Of the three, his Sprint is easily the most significant due to his intimate experience with these cars when they were new and his first-ever restoration experience approaching a half-century later.

One of the most limited-edition Mustangs ever produced was the 1972 Mustang Sprint convertible. Just 50 were produced and shipped to the Washington, D.C., sales district (DSO 170518) for the annual Cherry Blossom Parade.

According to the Sprint Registry, the Washington D.C., Jaycees and the Cherry Blossom Parade committee contacted Ford about making 50 convertibles for the annual parade held in early April to celebrate the blooming of these colorful trees around the Tidal Basin. It is not known why they decided to use these red-white-and-blue convertibles. However, no other vehicle could have been more appropriate for this event in 1972.

The seat upholstery is unique to these 50 convertibles. There is no trim code, and all 50 have the same Washington, D.C., DSO code of 170518. The Sprint Registry tells us that the Special Equipment Parts List from Ford, dated March 3, 1972, lists 27 unique parts that were part of the Sprint package. No other options like the B package were added to these 50 convertibles. What’s more, when the parade was over, these convertibles were distributed to Washington-area Ford dealers and sold to the public for the sticker price of $3,272.2—or even higher. 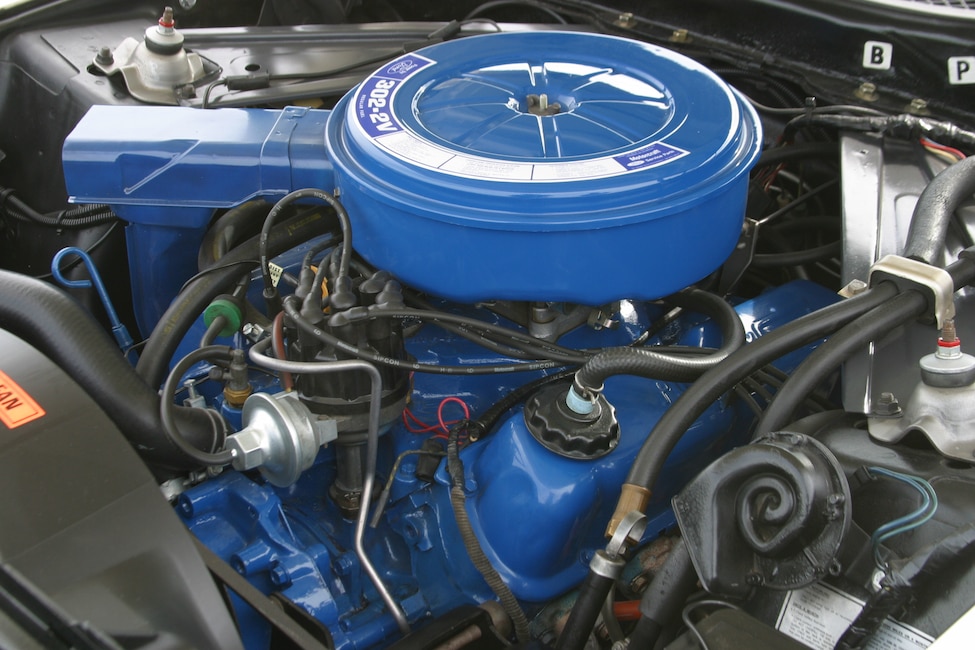 Ford’s standard V-8, the 302-2V, powered all 50 Sprint convertibles. According to the Sprint Mustang Registry, the rarest 1972 Sprint Mustangs produced weren’t the 50 special-order Cherry Blossom Festival parade cars, but instead 49 Sprint SportsRoof models with the standard 250ci inline six. In fact, if you’ve never seen a 1972 Sprint Mustang with a six-cylinder engine, there’s a reason. Ford bucked and sold just 414 hardtops and SportsRoofs with this big Ford six. Just 90 hardtops were produced with the 351C-4V CJ engine, making it a rare pick. The 1972 Sprint Mustang Registry tells us most of the 9,383 Sprint Mustang units—5,624—were fitted with the base 302ci two-barrel V-8, which made them easy sellers, thanks to fuel economy, pep, and good looks. The broad-shouldered 351C engine brought more power to the table with 3,345 produced. 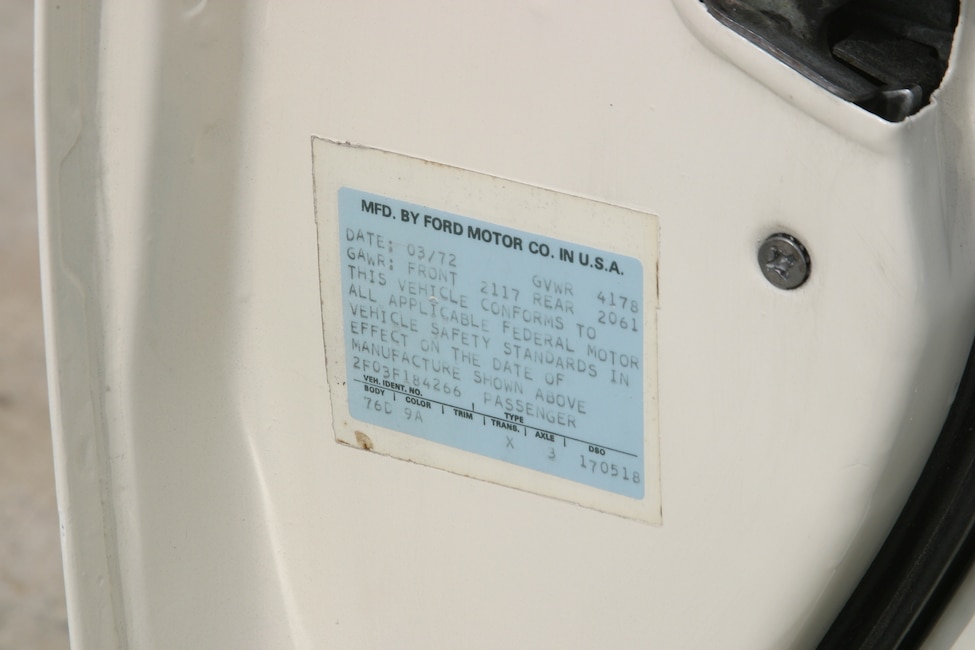 The Federal Certification sticker says it all on the Sprint convertibles. No trim code and a Washington, D.C., six-digit DSO code of 170518. 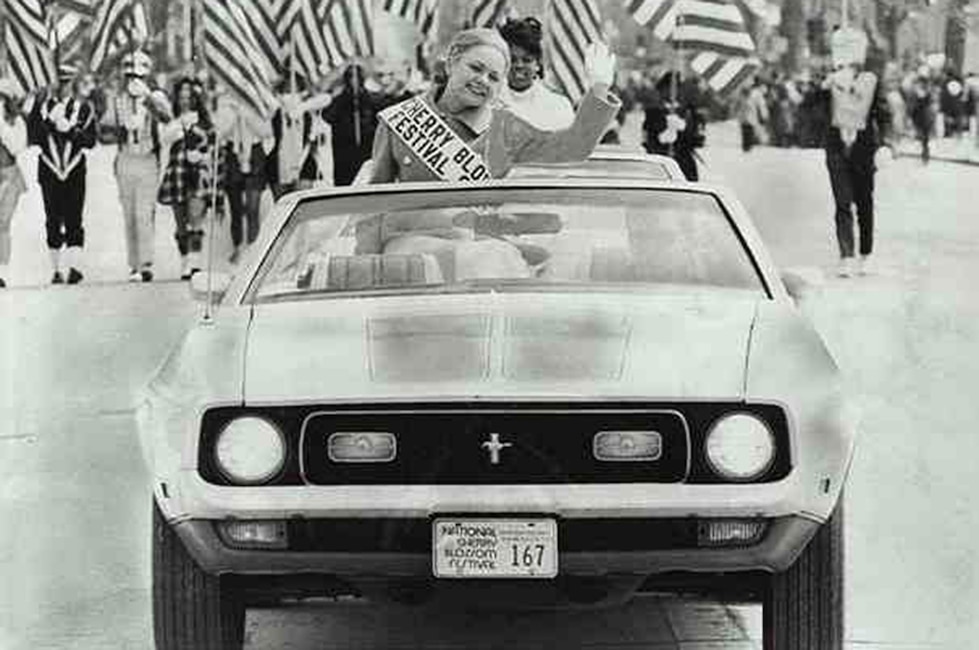 Cherry Blossom Queen Lynn Armstrong waves to the crowd from her pony driven chariot in April 1972.

Thirty-seven of the 50 convertibles have been found, according to the Sprint Mustang Registry. Their vehicle identification numbers are consecutive from 2F03F184256 to 2F03F184305, all with the same six-digit DSO code assembled at Dearborn in March 1972. An important footnote was who rode in these cars during the parade, and how horribly cold it was in Washington that day. Jesse Owens was Grand Marshall. Peter Dove was parade chairman. Lynn Armstrong of Massachusetts was named the Cherry Blossom Queen from 50 contestants from all 50 states.

No one has followed these convertibles more closely than Rex Turner of Northern Virginia just outside of Washington, D.C. Turner is the official 1972 Sprint convertible historian. He wants to locate the remaining 13 cars that have never been found with help from Mustang enthusiasts around the world. Turner has also authored a cool Cherry Blossom Sprint Mustang hardcover book. Contact him at [email protected] or (703) 319-3338 if you have any information.

If you would like to know more about the limited edition 1972 Sprint Mustangs, visit the 1972 Mustang Sprint Registry at www.1972Mustangsprint.com.